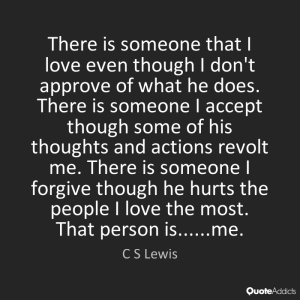 Acceptance is a difficult concept to deal with, even if we’re not talking about alcoholism. None of us wants to be unacceptable, or excluded from a group, whether we’re small children, adolescents, or older adults. The synonyms for acceptance are many, among them approval and recognition.

I know a young woman who is gay. She has found a woman she loves, is very happy, and engaged to be married. Most people she knows are very happy for her happiness, but not all are as accepting. Some are even judgmental, saying she and her partner would always be welcome in their home, but they would never attend her wedding. This makes no sense to me, and seems more than a little hypocritical. If you accept the fact that someone is gay, you recognize it, you approve of the lifestyle she/he has chosen.

With my sister, it’s different, but somewhat the same. She’s been sober for a while now, and attended several family gatherings as a sober alcoholic. I don’t drink often, mostly at major holidays, like Thanksgiving and Christmas. In fact, my mom laughs at me, because I will see a drink recipe shown on The Chew or something, get all excited about it, buy all the ingredients, bring them home, and then the liquor sits in our cupboards, because I’ve immediately lost interest. :P)

Back to my sister. I never used to drink around her. I thought it was a sign of solidarity if I joined her in not drinking. Recently, I’ve realized it was actually codependency, and I was not allowing her a sense of self-esteem, and achievement all her own. She’s very capable, and strong in her own right. But I’m sure she feels that exclusion, that non-acceptance among non-alcoholics, even though she’s accepted by her recovering alcoholic friends. I still laugh when I remember going with her to an open talk AA meeting at Sacred Heart in downtown Detroit. I was so nervous I wouldn’t even smoke, even though I badly wanted a cigarette. One of her friends finally leaned over to me and said, “So, do you have any vices?”

“And acceptance is the answer to all my problems today. When I am disturbed, it is because I find some person, place, thing, or situation — some fact of my life — unacceptable to me, and I can find no serenity until I accept that person, place, thing, or situation as being exactly the way it is supposed to be at this moment.” (Alcoholics Anonymous, p. 417)

14 thoughts on “A is for Acceptance”

Lay it on me! Cancel reply

Road to a Healthier Life

Steering You towards a Healthier Happier Life