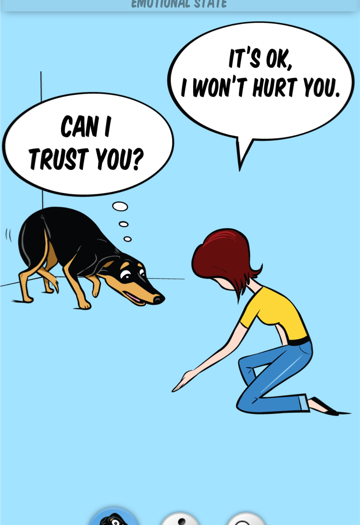 I recently rescued a shorkie (Shih Tzu plus Yorkie), who I call Pookie. Well, actually, it’s not been so recent now. We adopted/rescued him on September 29th of last year.

There has never been a more beloved dog. When he feels safe enough to come near, he is showered in hugs and kisses. The only way I can get him to come to me freely, is when I first come in the house from being gone, or when  I lure him with a treat. When he finally comes, I tell him (even though all he understands is my reassuring tone), “Pookie, Mamusha (Polish for Mom) would never hurt you. I love you  so much.”

I don’t know if you can tell by this picture, but the dog, besides cowering, has one paw lifted. Pookie does the same thing, only when he raises his paw it’s more in a sitting position, and his paw goes forward, sort of covering his mouth and submitting at the same time.

Lately, like when I go to put his leash on, I approach him very slowly, and he stands still instead of running around the room until he’s out of energy. Also recently, I have told him when I’m with him, “You can go anywhere you want. You can go in Pookie’s bed, or Pookie’s chair, or “Pookie’s” couch .” And if he’s cuddling next to me, I always tell him he can leave whenever he wants, or stay just as long as he wants. “You can go whenever you want to. You don’t have to stay. You’re a good boy.”

Me? As for me, I feel like the world’s worst dog owner. Any hints? At this point, I’m starting to believe he would be better off away from me, in another home. Yeah, as hard as it would be, I’ve seriously been contemplating it 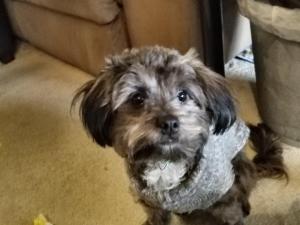 Lay it on me! Cancel reply